Three religions, or some elements from each, define the religious life of most people in Hong Kong.  These religions are Buddhism, from India, and Taoism and Confucianism from China.  Not unlike other Asian countries with these religions, there is ancestral worship as a way of honoring the dead ancestors.  Hong Kong also has representation of almost all the main religions in the world.

China is a country with great diversity of religions, with over 100 million followers of various faiths.  The main religions are Buddhism, Islam, Christianity, China's indigenous Taoism, along with Shamanism, Eastern Orthodox Christianity and the Maxi people's Dongba religion.  The Hui, Uygur, Kazak, Kirgiz, Tatar, Ozbek, Tajik, Dongxiang, Salar, and Bonan people adhere to Islam; the Tibetan Buddhism, and the Dai, Blang and Deang to Theravada Buddhism.

Quite a few Miao, Yao and Ti are Christians.  Religious Han Chinese tend to practice Buddhism, Christianity or Taoism. Buddhism was first introduced to China from India approximately in the first century A.D., becoming increasingly popular after the fourth century.  Tibetan Buddhism, or Lamaism as it is sometimes called, is found primarily in Tibet and Inner Mongolia.

Now China has more than 13,000 Buddhist temples, with about 200,000 monks and nuns. Islam probably first reached China in the mid-seventh century.  During the Tang (618-907) and Song (960-1279) dynasties, Arab and Persian merchants of the Islamic faith came overland through Central Asia to northwest China, bringing with them the Islamic faith.

The Yuan dynasty (1279-1368) witnessed the zenith of prosperity of Islam.  Now China has more than 30,000 mosques and more than 40,000 imams and ahungs. Christianity reached China several times after the seventh century, and was introduced to the country on a large scale after the Opium War of 1840.  Now there area bout four million Catholic believers, 4,000 clergy and more than 4.600 churches and meeting places in  China.

Protestantism was introduced to China in the early 19th century, and spread widely after the Opium War.  Now China has a bout 10 million Protestant believers, 18,000 clergy and more than 12,000 churches and 25,000 other centers of worship.

Taoism probably took form as a religion during the second century, originating from sorcery, pursuit of immortality and other supernatural beliefs in ancient China.  Taoists take the philosopher Lao Zi (traditionally said to be born in 604 B.C.) as their teacher, and his work, the Dao De Jing (The Classic of the Way and Its Power), as their canon.  Sublimating the philosophical concept of "Dao" or "Tao" (the Way) as described in the Dao De Jing), the posit that man can become one with the "Tao" through self-cultivation, and achieve immortality.  China now has more than 1,500 Taoist temples and over 25,000 Taoist monks and nuns.

The Criminal Law of China, the General Principles of the Civil Law, the National Minority Regional Autonomy Law, the Education Law, the Labor Law, the Electoral Law of the People's Congresses, and the Organic Law Governing Villagers' Committees include corresponding articles stipulating that citizens' freedom of religious belief should be protected, and that citizens who believe in, or do not believe in, any religion should not be discriminated against.

No one shall interfere with them.  The Regulations on the Management of Sites for Religious Activities promulgated by the Chinese government specify: The site for religious activities shall be managed by the administration organization of the site autonomously.

Its lawful rights and interests and normal religious activities held at the site shall be protected by the law.  Whoever infringes upon the lawful rights and interests of a site for religious activities shall bear legal responsibility.  All religions are equal.  In China, no religion occupies a privileged position.  The Chinese government treats all religions equally, without discrimination.  All religions shall respect each other and co-exist in harmony.

In China, religion is separated from political power and from education too.  State power shall not use religion in its own service' and religion shall not interfere with the state's administration, judicature and education.  All religions adopt the principle of independence and self-management.  Chinese religions shall be run solely by the religious organizations, clergy and believers themselves.  Chinese religious affairs and organizations shall not be controlled by foreign forces.  Chinese religious organizations are willing to conduct friendly exchanges and with counterparts in other countries to strengthen mutual understanding and friendship.  But such exchanges must be based on complete equality and mutual respect.

Links to other websites 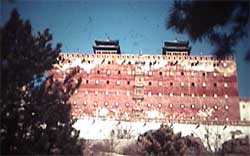 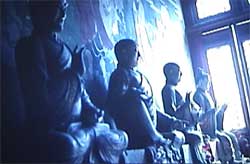 Search results will be shown at the bottom of the web page.

(We do not provide links to, or knowingly promote, any violent or pornographic sites.)